Home Health Know the difference between hallucinations and delusions 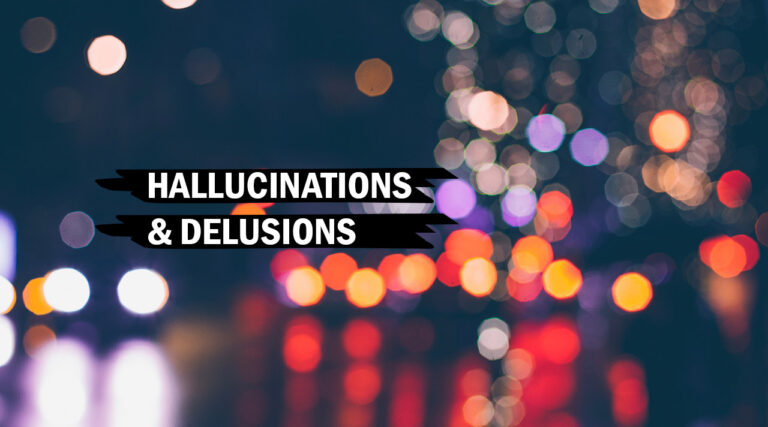 Some people are affected by mental disorders. It weakens their way of thinking, behavior, mood, and feeling. They can be occasionally or can be chronic. Two of the major mental disorders that we are going to discuss are hallucinations and delusions. Often they are considered the same mental ailments. But they are not. Indeed, there is a common factor between the two which is both are false realities. A brief difference between the two is hallucination is a sensory perception, and delusion is a false belief.

Giving a brief about the two, in hallucinations, a person imagines someone near to him or talking, but there is no one around. On the other hand, in delusions, there is a false conception of being something, but there is nothing like that. Sometimes there are illnesses or other medical situations that result in hallucinations, delusions, or psychosis. These diseases range from brain tumors, syphilis, Parkinson’s disease, stroke, epilepsy, Huntington’s disease, substance use, or even HIV.

Knowing hallucinations in detail is a mental disorder where a person senses something in reality, but there is nothing like that. It can happen via substance use, medications, and some other mental health states. Hallucinations differ in forms like visual, auditory, smell, or taste.

In this condition, a person might feel like experiencing bugs on his skin, hearing someone talking about him, or watching something, which isn’t real. Not just visual, but a person senses the smell which is not present there. There are different medical conditions indicating the cause of hallucinations. These include mental illness, high fever, poor sleep, socially inactive, migraine, epilepsy, visionary problems, substance use, migraine, and seizures.

Delusions: how is it different from hallucinations

Now coming on to the next is delusions. Most people consider it to be the same as hallucinations. But it is not true, except the similar factor which is thinking to be something real in existence when it is not. Delusions are completely false. It is one such symptom that indicates a disruption in thinking. The belief has no reference to cultural or religious background. Moreover, it has no connection with the perception of the person who thinks them true.

Delusions can range from anything. Some of the common symptoms of this mental disorder include false assumptions of infidelity, guilt, incompetency, love, oppression, and glory. The conditions that lead to delusions include bipolar psychosis, schizophrenia, and delusional disorder.

Both hallucinations and delusions are also related to another mental disorder, schizophrenia. It also has the common symptoms with the above two, i.e losing touch with reality. It often appears after psychotic conditions resulting in delusions and hallucinations. The other problems presented by these 3 mental disorder conditions include effect on daily routine, and unable to think and memorize.

When it comes to the treatment of hallucinations problem, then it depends on the particular case that defines the main cause of it. There is counseling with medications. Specific medication is prescribed depending on the symptom of hallucination.

Counseling is indeed very helpful as it helps deeply and the development of strategies to cope with this mental disorder. If in case it has been found that the cause of hallucination is medication, then the doctor might lessen the dosage of medication or won’t continue it further.

After briefing about the treatment of hallucination, now let us know how the problem of delusion can be treated. Well, it is possible with CBT therapy. The full form is Cognitive-behavioral therapy. It is known to be the best in treating a patient having delusions. It is a procedure where the patient is made connected with a mental health expert. He finds out the reasons for delusions and how they affect him. Thus, executing the need for CBT strategies. In the case delusions are found related to psychosis, then the therapy of CBT is applied with antipsychotic drugs.

It has been noticed that people who develop some kind of mental disorder are afraid to get treated or go to see a health expert It is all because of a fear in mind that they will be made fun of or will be treated indifferently. Well, this approach will only worsen your situation, so better get treated in time if any person who is known to you is indicating some kind of mental disorder symptoms. There is no shame in getting treated. A therapist will do all possible efforts in easing your condition so that you lead a normal life.
Adding a piece of information, pharma Track and Trace help spot the past and current locations of any particular item in your supply chain. It is a robust mechanism that fills the purpose of pharma companies. It comes as a regulatory mandate to track and trace abilities and special needs for recording and sharing supply chain data.